Brigatinib in Crizotinib-Refractory + NSCLC: 2-Year Follow-up on Systemic and Intracranial Outcomes in the Phase 2 ALTA Trial

Brigatinib (180 mg once daily with lead-in) continues to demonstrate robust PFS, long iPFS and duration of intracranial response, and high intracranial objective response rate in crizotinib-refractory patients. Depth of response may be an important end point to capture in future targeted therapy trials.

Brigatinib is a next-generation oral ALK inhibitor approved in the United States and European Union for the treatment of metastatic ALK + NSCLC patients with progressive disease on or with intolerance to crizotinib. 15 , 16 In the primary analysis of the phase 2 ALTA trial with 8-month median follow-up, investigator-assessed median PFS was 9.2 months in patients treated with brigatinib 90 mg once daily and 12.9 months in patients treated with 180 mg once daily with 7-day lead-in at 90 mg. 17

Here, we report updated data and new exploratory analyses on the two brigatinib dosing regimens evaluated in patients with crizotinib-refractory, advanced ALK + NSCLC in the ALTA trial 17 with approximately 2 years of follow-up since the last patient enrolled.

The ALTA trial ( ClinicalTrials.gov identifier: NCT02094573 ) is an ongoing phase 2, open-label, randomized, multicenter, international study. Methods and complete protocol for ALTA have been previously published. 17 In summary, eligible patients (≥18 years old) had locally advanced or metastatic ALK -positive NSCLC, with disease progression while receiving crizotinib, with no other previous ALK-directed therapy, with at least one measurable lesion per Response Evaluation Criteria in Solid Tumors version 1.1 (RECIST version 1.1), 18 and Eastern Cooperative Oncology Group (ECOG) performance status of less than or equal to two. Patients should not have had any of the following: (1) received crizotinib within 3 days of the first brigatinib dose; (2) cytotoxic chemotherapy or radiation therapy (except stereotactic [body] radiosurgery) within 14 days; or (3) monoclonal antibodies within 30 days. Patients were excluded if they had a history or presence of pulmonary interstitial disease or drug-related pneumonitis, or symptomatic CNS metastases that were neurologically unstable or required an increasing dose of corticosteroids. The protocol was approved by the institutional review board or ethics committee at each site. The study was conducted in accordance with the Declaration of Helsinki and International Council for Harmonisation guidelines for good clinical practice. All patients provided written informed consent.

Patients were stratified by the presence or absence of baseline brain metastases and best response to crizotinib (investigator-assessed complete response [CR] or partial response [PR] versus other or unknown), and randomized 1:1 to either 90 mg once daily (arm A) or 180 mg once daily with a 7-day lead-in at 90 mg (arm B). Patients continued to receive brigatinib until any of the following ensues: (1) disease progression, requiring alternative systemic therapy; (2) intolerable toxicity; or (3) consent withdrawal. Treatment in either arm could be continued after progression at the investigator’s discretion. Patients in arm A could transition to brigatinib 180 mg once daily after progression at 90 mg once daily. Dose interruptions or reductions were mandated to manage treatment-related adverse events (AEs). AE severity was graded using the National Cancer Institute Common Terminology Criteria for Adverse Events version 4.0.

Disease was assessed per RECIST version 1.1 in chest and abdomen images obtained by means of contrast-enhanced computed tomography or magnetic resonance imaging at screening and every 8 weeks through cycle 15 (28 days per cycle) and then every 12 weeks until progression. Baseline CNS imaging was required in all patients; for patients with CNS metastases, contrast-enhanced magnetic resonance imaging of the brain was also required every 8 weeks thereafter. A central independent review committee (IRC) reviewed on-study images. Objective responses were confirmed at least 4 weeks after initial response. Follow-up for survival and subsequent therapy continued every 3 months after treatment discontinuation.

The intention-to-treat population (all randomized patients) was used for efficacy analyses. Only patients with IRC-assessed brain metastases at baseline were included in IRC intracranial efficacy analyses. The safety population comprised all patients who received at least one dose of brigatinib. Exact binomial method was used to calculate confidence intervals (CIs); 97.5% CIs were estimated for cORR (primary end point), and 95% CIs were used for other end points. 17 Median values and two-sided 95% CIs for time-to-event (duration of response, PFS, and OS) analyses were calculated using Kaplan-Meier methods. IRC-assessed systemic and intracranial efficacy data had a last scan date of September 18, 2017. Clinical data are reported as of September 29, 2017. Statistical analyses were performed using SAS software (SAS Institute, Inc., Cary, NC, USA; version 9.4). 17

b Primary end point tested at 0.025 alpha level for each dose.

Multivariate analyses on the basis of both investigator-assessed and IRC-assessed outcomes reported that 26%–50%, 51%–75%, and 76%–100% target lesion shrinkage versus no shrinkage was independently associated with longer PFS and OS ( Supplementary Table 2 ).

Efficacy by Previous Response to Crizotinib

a Relationship to study treatment was as per investigator assessment.

As reported previously, 17 a subset of pulmonary AEs with early onset (median: Day 2; range: Days 1–9) including dyspnea, hypoxia, cough, pneumonia, and pneumonitis occurred in 14 (6%) of 219 treated patients (seven [3%] had grade ≥3 events). All events occurred at 90 mg in both arms; no such events occurred after escalation to 180 mg. Management of these events included dose interruption or discontinuation and empirical treatment (e.g., steroids and antibiotics).

At a median follow-up of 24 months, the approved brigatinib dosing regimen of 180 mg once daily (with 7-day lead-in at 90 mg) given post-crizotinib was associated with a high cORR (56%), comparable to the objective response rate (ORR) reported for the United States Food and Drug Administration–approved ALK inhibitors ceritinib (33%–58%) 7 8 9 10 and alectinib (46%–50%). 11 , 12 It was lower than that reported for lorlatinib (73%; approved after crizotinib use plus at least one other ALK inhibitor, or after alectinib or ceritinib as the first ALK inhibitor) in this setting. 19 These similar response rates may well reflect shared activity against comparable percentages of the most common post-crizotinib resistance mechanisms in either the body (extra-CNS) or CNS. However, the median IRC-assessed PFS with this brigatinib regimen (16.7 months) seems numerically prolonged relative to other drugs in the same clinical setting (ceritinib median PFS: 5−7 months, 7 8 9 10 alectinib median PFS: 8−9 months, 11 , 12 lorlatinib median PFS: 11.1 months). 14 , 19 In addition, the median PFS for brigatinib was remarkably similar for the same dose in the same setting explored in the phase 1 study of brigatinib (16.3 months). 20

Why brigatinib is associated with the longest recorded median PFS to date of any second- or third-generation ALK inhibitor in the post-crizotinib setting is only partially understood. Preclinically, it has a broader spectrum of activity against the ALK resistance mutations that arise after crizotinib use than that of either ceritinib or alectinib, but not that of lorlatinib. 21 , 22 Whether this reflects either some aspect of clinical anti- ALK activity missed by preclinical modeling or some clinically relevant non– ALK -related activity inherent in brigatinib but not in the other drugs has to be considered.

With regard to CNS activity (which is not assessed in the preclinical comparison data), the 180-mg (with 7-day lead-in at 90 mg) brigatinib dosing regimen demonstrated sustained intracranial activity in patients with baseline brain metastases, with an IRC-assessed confirmed iORR of 67% in patients with measurable CNS lesions, a median duration of intracranial response (iDOR) of 16.6 months, and a median iPFS of 18.4 months. Although comparisons to CNS outcomes with other ALK inhibitors are limited by small sample sizes and differing patient characteristics and assessment methods, intracranial outcomes with brigatinib seem numerically superior to post-crizotinib data for ceritinib (median iDOR, 7 months 10 ) and alectinib (median iDOR, 11 months). 23 24 25 Lorlatinib seems to have at least comparable CNS activity. 13 Among 59 patients who received lorlatinib in the post-crizotinib setting in a phase 2 study, the confirmed iORR in patients with measurable baseline CNS lesions was 87% (20 of 23 patients). 13

In the exploratory analysis presented here using investigator-assessed data, the percentage of patients receiving the 180-mg (with 7-day lead-in at 90 mg) brigatinib dosing regimen who manifested at least 30% shrinkage of target lesions inside versus outside of the CNS was high in both body compartments. Although the data set is too small to impute statistical significance, the numerical difference (82% versus 67% in favor of the CNS) continues to support the importance of assessing CNS and extra-CNS data separately, and also in the usual combined overall ORR and PFS data sets. 26 , 27 Specifically, owing to the poor CNS penetration of crizotinib, CNS penetrant drugs given after crizotinib have been predicted to have higher efficacy in the CNS than extra-CNS, as the CNS lesions may behave as if they are more treatment naive. 28 This effect is also apparent from the available lorlatinib data in which the CNS versus extra-CNS ORR difference after crizotinib use is 88% versus 63%, remarkably similar to the brigatinib data shown here; the ORR rates for lorlatinib drop to 64% versus 37% after two previous ALK tyrosine kinase inhibitors (TKIs). 13 Notably, the target lesion response rates do not include any contribution from non–target lesions, which may explain the numerically higher values than those reported in the formal RECIST ORR in this study.

Results of the exploratory analyses of survival outcomes in relation to the depth of target lesion shrinkage showed that patients who had target lesion shrinkage by IRC or investigator assessment, including patients who had not achieved confirmed PR, had numerically longer PFS and OS than patients without tumor shrinkage. The value of tumor shrinkage as an appropriate indicator of outcome in NSCLC has been evaluated in other retrospective analyses in patients with advanced ALK + or EGFR –mutant NSCLC. 29 30 31 A multivariate analysis of the two crizotinib trials (n=305) found that OS increased as the quartile for depth of target lesion response increased (adjusted OS HR versus no tumor shrinkage [95% CI]: 1%–25% shrinkage, 0.94 [0.34–2.61]; 26%–50% shrinkage, 0.56 [0.21–1.51]; 51%–75% shrinkage, 0.28 [0.11–0.73]; 76%–100% shrinkage, 0.05 [0.01–0.28]). However, depth of response was not shown to be a substantial predictor of OS or PFS in advanced EGFR –mutant lung cancer in a landmark multivariate analysis of data from five randomized trials (n=1081) of front-line EGFR -TKI versus chemotherapy. 32

The safety profile of brigatinib was consistent with previous reports, with no new safety concerns noted. 17 , 33 Clinically apparent pulmonary AEs occurring within days of initiating brigatinib were observed in 6% of treated patients in ALTA. Management strategies of these transient events include dose interruption and clinical evaluation, with the potential for tolerization through supportive care and continued dosing. 34

In conclusion, the recommended dosing regimen of brigatinib (180 mg once daily with 7-day lead-in at 90 mg) is associated with significant intracranial, extracranial, and systemic activity and the longest reported median PFS after crizotinib use to date of any second- or third-generation ALK TKI. The continued suggestion of a difference in efficacy between the 90- and 180-mg dose cohorts supports the goal to maximize the proportion of patients escalating to 180 mg (arm B of this study). 34 Intracranial versus extracranial efficacy and depth of response may be important end points to capture in future targeted therapy trials, and response to previous crizotinib may be important to consider when comparing data between trials.

Takeda makes patient-level, deidentified data sets and associated documents available after applicable marketing approvals and commercial availability have been received, an opportunity for the primary publication of the research has been allowed, and other criteria have been met as set forth in Takeda’s Data Sharing Policy (see https://www.takedaclinicaltrials.com/ for details). To obtain access, researchers must submit a legitimate academic research proposal for adjudication by an independent review panel, who will review the scientific merit of the research and the requestor’s qualifications and conflict of interest that can result in potential bias. Once approved, qualified researchers who sign a data sharing agreement are provided access to these data in a secure research environment.

This eprint has been sponsored by 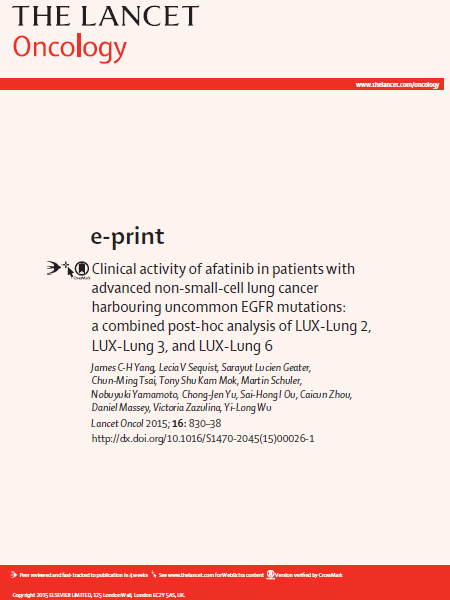